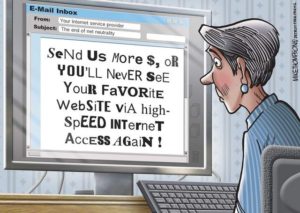 Net Neutrality – The idea of Net Neutrality is that when you pay for internet service it should be delivered to you in the same way as your mail, phone, water, electric and even yourself when you ride in a taxi or travel in an airplane. That is that those services are required to deliver a good from point A to B without bias. This means that FreshMarket can’t pay FedEx to stop delivering food to Whole foods. FedEx is bound by law to deliver packages sent to both companies without discrimination. These types of services are classified as Common carriers. They use a common form of transport available uniformly to all.

What makes this important is that telephone companies, like AT&T, made the first major steps into internet over phone lines (remember AOL dial up?) and so it was assumed that the internet traffic would be held to the same standards as the phone service, that they were common carriers.

This worked well for years until internet providers started to push the boundaries of what was acceptable of common carriers. They began to discriminate traffic and when the FCC tried to stop this they were sued by Verizon who said ISPs had never technically been classified as common carriers under Title II of the Communications Act of 1934. Verizon won the court battle meaning that the FCC had no authority to tell internet providers they couldn’t discriminate the traffic they delivered to subscribers – and so they did.

Comcast demanded money from Netflix saying if they didn’t pay they would slow down traffic from Netflix or stop it all together. And Netflix, having no other recourse, paid. The problem with this is that the average consumer has already paid to have internet delivered to them and that means any internet I want not what you (cable company) decide to send to me. It’s a form of discrimination, or blackmail but either way Comcast put itself between what the consumer wanted and what the service provider provided and attempted to collect another fee that was not previously present. All the while the end user, you, or me, had no leverage and also no choice to move to another company that doesn’t do this because it’s pretty much a monopoly on cable these days.

So in summary, Comcast has already been paid for it’s service by the end user (you) with the assumption the content would be delivered to you without discrimination. Then Netflix, who will go out of business without customers, is forced to pay an additional fee to Comcast to deliver it’s content to the end user (you). I encourage you to watch this video which explains all this in a fun and educational way.

Our Reviews on Google

Bought a nice Dell computer from them today, extremely good quality and value for a great price! PC looked brand new, has no dust, and is whisper quiet. They do a really good job, and just as their name says, they are super friendly! I have worked in the tech industry for a long time and I know the sort of things to look out for, but I can safely and proudly say that these guys are professional and great and offer great servives and products for a great price! Will definitely be coming back here of I ever need anything else!

They were so easy to work with. Came exactly on time, knew what was happening, made great recommendations to get the issue fixed. I’d use them anytime!